Peter James Doueihi is an entrepreneur for entrepreneurs – creating new co-working facilities in Parramatta where start-ups can access flexible, cost effective offices to grow their businesses and rub shoulders with others doing the same thing.

Peter James Doueihi is an entrepreneur for entrepreneurs – creating new co-working facilities in Parramatta where start-ups can access flexible, cost effective offices to grow their businesses and rub shoulders with others doing the same thing.

The idea for the co-working space was born of Peter’s own search for the right place to set himself up.

After completing a degree in mechanical engineering, Peter found himself on lots of worksites, and when he got chatting with the business operators he discovered many had no online presence. And so his first venture was born – building websites for tradies.

“When I quit my job to start that first business I had $4 in my bank account. Mum thought I was crazy,” he says.

Pretty soon, with more work coming in, he realised he wanted to be in a space with others who were doing interesting things, and that led to his second venture, launched about five years ago: Grounded Space co-working.

“I really had no idea what I was doing,” he says. “I had never heard of co-working. I thought I invented it!

Grounded Space offers a mix of long term and short-term desk spaces and offices that give businesses the flexibility to spend as much or as little time as they like in the space, only paying for what they use.

Parramatta was always going to be the location for Grounded Space.

“I grew up in the area. My first job was here. It’s the centre of Sydney. This was definitely the right place,” Peter says.

Proceeding on instinct, Peter looked for a ground level space so he could include a cafe.
“Higher levels are cheaper but I needed people to be able to see us. We chose a building in George Street that has high levels of foot traffic, and we started a hole-in-the-wall café that drew people in and gave me the chance to tell them what I was trying to do. I had one casual staff member. I ran the café myself, and the first three months was a lot of networking. Parramatta has a really supportive business community and I have been fortunate to have received many introductions to the right people.”

Peter now has a second Grounded Space at Westfield, opened about four years ago, with a full size café onsite.

“I didn’t always have a detailed plan and haven’t always had a runway in terms of capital, which is risky,” he says – noting that the risk came to fruition when COVID-19 caused complete shutdown for months. 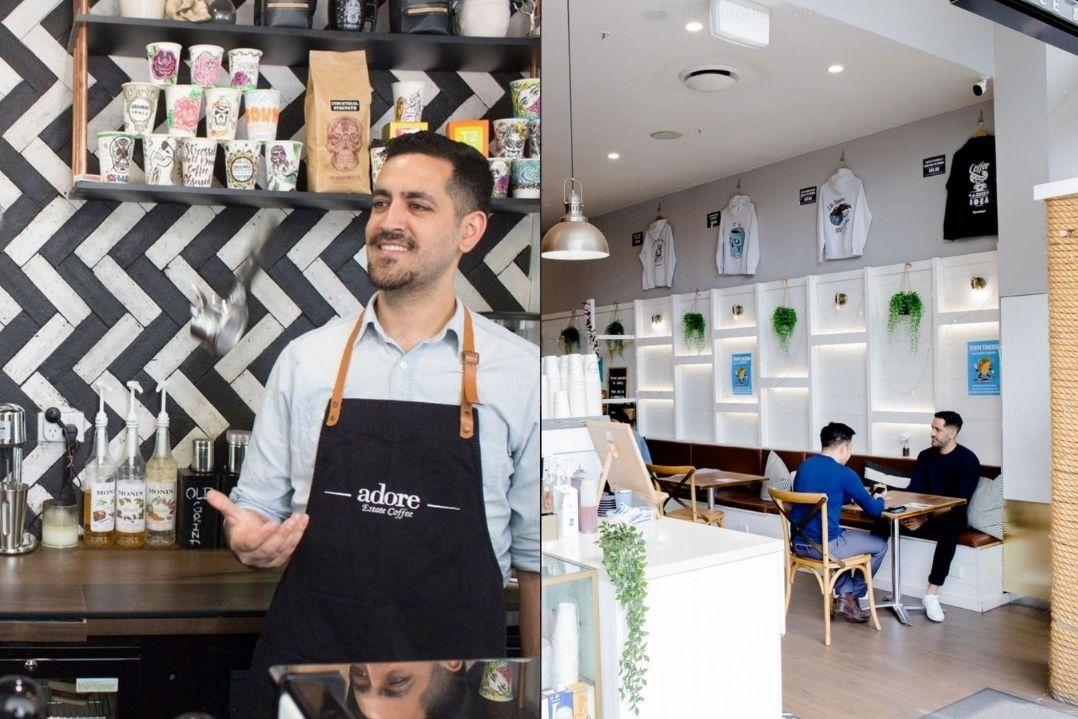 On the other side, now, though, Peter is finding the huge shift in the way people work is presenting him with new opportunities.

“There’s been really strong demand from businesses looking for office spaces, so we are converting part of our George Street space to private offices. I expect them to be full by the end of the year. And this is great, because it gives us a level of security, but I don’t want to move too far from my original vision around shared workspaces. The initial goal was a place where start-ups could come together, and that’s still the goal.”

Already, Peter says the immersive co-working experience is paying off.

“We had one business that was creating an AI platform for use in fixing damaged pipes. After a conversation in the space, that business owner suddenly had an introduction to Sydney Water, which is based here in Parramatta, and they’ve gone on to work with a wide range of clients across Australia and now into the US and UK.”

Peter’s goal now is to rebuild the business post-COVID-19.

“We’re really coming back from COVID-19. Our staff are back full-time, we’re running events and it feels like we are getting back to our core, to where we started.”

Peter has two key pieces of advice for people starting their own business: give yourself some budget breathing space, and pace your growth.

“Growing too fast can be a challenge, especially with a business that has a physical footprint. When you double the staff and double the rent, you also double the risk,” he says.
“And in the early days, it is worth working on the side if you don’t have really solid financial backing. If you hang on to a secure job, you can work in your business without worrying about whether you have enough money to get you through the next week.”

‘Quantal’ leap from research to start-up

From the moment Belinda Chapman first thought about setting up her own research lab, she knew she’d be building her business in western Sydney – and that’s exactly what she’s done with Quantal Bioscience.
Innovation

Parramatta's emerging startup ecosystem is built on the strength of our local talent, diverse community, and the success of our motivated startups.